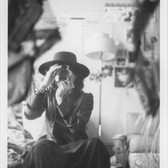 One year ago, I started Curious Frame for my thoughts on photography. The act of shooting is very dif